It’s the beginning of the new year, and I’m still left reeling from the aftershocks of 2011. The mountain of December premieres have lost their novelty just in time for the wave of January dramas to roll into the spotlight. The sheer amount of promising drama options is enough to make my head spin. I’m ridiculously tempted to drop some of the currently airing dramas that have me seething in frustration, but the stubborn devil on my shoulder won’t let me give up on even the flimsiest premise. So I guess it’s going to take a bit of impressive time management and lost sleep, but I’m determined to watch (or at least start) all the dramas I’m interested in. And to hell with the consequences! Happy new year to me.

I’m piling a ridiculous amount of dramas onto my plate, and I’ve never really had the stomach for buffets. I’m just hoping to keep my sanity until the spring. I’ve wanted to write about dramas ever since stumbling upon my first episode of Boys Over Flowers, but I felt that my perspective wasn’t seasoned enough for any sort of valid criticism. I still doubt that my voice is worth any sort of merit to the drama blogosphere, but I’m hoping that my catharsis can at least throw a fresh opinion into the ring. So to kick start this blog, I’ve decided to map out the lay of the early 2012 drama land – to sort of get a feel for the locals and landmarks before diving in to any blithering reviews. Here’s to a new drama year! 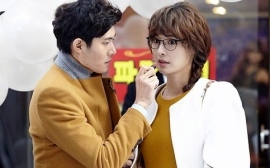 Color of  Woman: Now that we’re more than halfway through, I can quite honestly say that I don’t want to be watching this drama anymore. I’ll stick around because I’ve already invested nine hours of my life to these characters, but I’m not happy about it. I absolutely loved the opening two episodes. The show was fun and flirty with characters that had endless potential for growth professionally and personally. But then the plot started to skid along on its heels, the workplace arcs jumped ship, and the characters remained frustratingly stagnant. It also doesn’t help that our two leads have no sexual chemistry. I’ll keep watching for the too-good-to-be-true second male lead, hoping that the show kick starts some of the charm that made it so watchable in the first place. But I’m not holding my breath.

What’s Up: This was the drama that I had the most expectations for, and three episodes in (I’m a bit behind, but planning on catching up eventually) I’m a bit underwhelmed. These characters intrigue me, but I haven’t connected with any of them yet. I suppose I’m hanging around for the ragtag motley crew that’s bound to group up, but beyond that, I really have no idea where this drama is headed. I get this uncomfortable feeling that the story’s just coasting along with no climax in sight, but I’m not about to throw in the towel yet. The song and dance numbers are cute (if a bit random) and the cast seems genuinely talented. Once I get a lock on where this drama’s going to take me, I’ll be able to settle in a bit more comfortably. 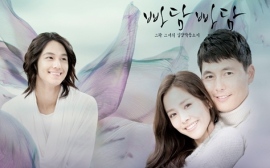 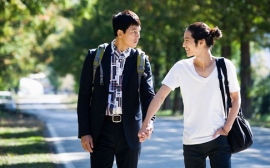 Padam Padam: I’m completely taken with Padam Padam. Something about it just hits a sweet spot – which, funny enough, often overlaps my drama blind spot. So I’ll happily overlook a bit of weaker acting for the adorable relationships and Groundhog Day fantasy sequences (that are so gorgeous that it knocks my socks off). Mind you, I’m stuck at episode nine, and from the looks of the preview, episode ten is a big shithole of angst, but at this moment in time, I’m totally on board until the bitter end. I don’t think this drama will end up on my short list of favorites to rewatch, but it’s an entertaining ride while it lasts. 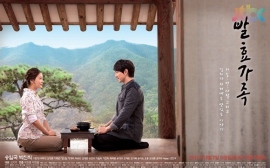 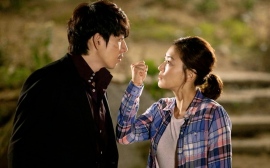 Fermentation Family: I took one taste (heh) and was done. I love Park Jin Hee, but nothing could have kept me interested in twenty-plus episodes of Song Il-Gook’s apologetic, little mustache. The pilot was scatterbrained (began as an action flick, transitioned to restaurant-family drama, then suddenly we were back in a half-hearted fight sequence), and I quickly lost interest. The premise held no particular appeal for me, and as I stared at the link to episode two, all I could see in my drama watching future was boredom. So Fermentation Family was dropped like a hot potato. Better luck next time, I suppose.

Skip Beat (Extravagant Challenge): I was so charmed by the first episode of Skip Beat that I burned the midnight oil reading the entire manga series online (god bless hosting sites), and after reading the original Japanese source material, the drama lost its sparkle. Because the manga was so amazing, I was more irked by the Mandarin dubbing and slower pace, and while I could still appreciate that the tone of the drama suited Skip Beat perfectly, watching the drama just wasn’t the same. Because I can’t exactly un-read the manga, I’m never going to be as happy with upcoming episodes, but I’m still determined to enjoy Skip Beat for what it’s worth. 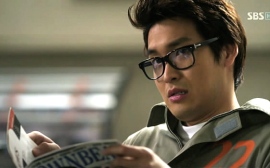 History of the Salaryman: I wanted so badly to fall in love with this drama after reading sparkling review after sparkling review. And as I sat staring at my laptop, I was a little unimpressed. I recognized that some scenes were meant to be funny, but I could never really muster up a good laugh. The actors’ commitment to the zany characters was admirable, but I couldn’t find any connection to ground them to reality. And while the dark humor was fun and fresh, the sudden switch to a more poignant scene (marked by slow, dramatic music, naturally) gave me whiplash. I’ll stick around for a bit longer – mostly because I don’t want to miss the drama if it turns out to be the best thing since sliced bread.

Wild Romance: Drama, I know it’s early, and I may be coming on too strong, but I think I love you. Going into Wild Romance, I really had no expectations. I knew Lee Dong Wook would be handsome and that Lee Shi Young would be sporting a hideous haircut, but I wasn’t expecting to be so charmed by the premise and characters. It’s a simple setup, really, but the relationships are so endearing. It feels more buddy flick than romcom at this point in the game, but I have confidence that the show will be able to whip up some realistic chemistry when the romance gets going in earnest. Both leads are completely selling their roles, and for now, I’m happy to sit back and enjoy the side-splitting pettiness.

Moon that Embraces the Sun: I’ll admit, sageuks are usually not my cup of tea. But throw in some sizzling romance, gorgeous visuals, and a handful of my favorite actors and I’m willing to invest twenty plus hours to (slow-paced) court intrigue. The premiere of Moon that Embraces the Sun didn’t strike me as anything particularly fresh, but the child actors are beyond adorable and the writing is solid. I’m happy with the pacing, but I am still ridiculously impatient for the adult cast (total Kim Soo Hyun fangirl). As long as the drama lives up to its potential, I’ll remain a happy blogger.